Doctor Pierre Dupont and College of Chiropodists being sued for $15M

A former patient of a controversial Ottawa foot doctor has filed a class-action claim against him, his business, and the College of Chiropodists of Ontario, after Pierre Dupont allegedly implanted unapproved stents into patients’ feet.

About a dozen other former patients will be asking the court to certify the claim. 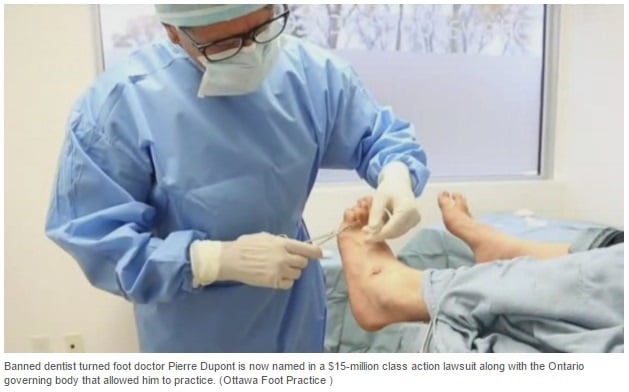 The lawsuit, which was filed in Ontario Superior Court on Wednesday, is seeking $15 million in damages on behalf of the former patients. Neither Dupont nor the college has filed a statement of defence. 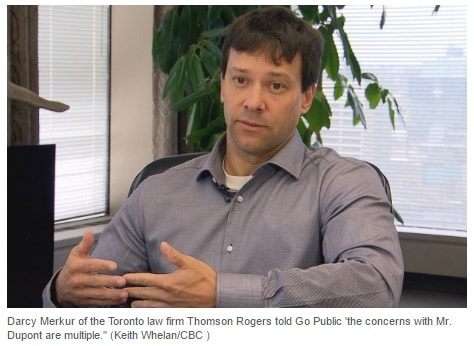 “It’s alleged that he told his patients he was going to use a certain type of approved stent. The allegation is he in fact did not use the approved version, and instead used a modified version that he did on his own without the consent of the patients,” Merkur said.

In an earlier statement to Go Public, Dupont said he won’t comment until complaints that are now before the Ontario College of Chiropodists are resolved.

“I would encourage everyone to keep an open mind and not rush to judgment. There is another side to this story which will become known once these matters are resolved,” he added in the statement.

Neither he nor the college responded to our questions about the class-action claim.

According to the claim, Dupont showed “total and reckless, wanton and wilful disregard” for the health, safety and well-being of patients and his business, Ottawa Foot Practice, “employed incompetent and/or improperly trained or inexperienced employees, lacking in the necessary qualifications.”

The action also names the College of Chiropodists of Ontario for failing to fulfil its duty to protect the public by not disclosing to the public information about Dupont’s past medical errors and complaints.

That includes allegations that the college went against its own policy by allowing Dupont to open a practice in Ontario. Under its own rules, that shouldn’t have been allowed.

When asked about that, college registrar Felecia Smith said there are sometimes exceptions.

“It does not mean that if an applicant has a finding of professional misconduct in another profession, no matter how long ago and no matter what the actual misconduct was, that the applicant can never be registered as a chiropodist in Ontario. The application and all of its relevant facts must be considered by the registration committee,” Smith wrote in an April email to Go Public before the allegations of the unapproved stents became public.

The Go Public/Radio-Canada investigation found the college did place Dupont on a two-year probation term when he arrived in Ontario, but according to the podiatrist in charge of monitoring him during that time, the college never followed up before granting Dupont a licence.

Dupont was banned from dentistry for life in Quebec in 2005 after patients there filed serious complaints against him. He then retrained to become a foot doctor, moving to Ontario.

It was only after Go Public’s stories on Dupont were published that the college took any public action. It placed two restrictions on Dupont, according to a recent post on its website.

Erika Brathwaite is a former Dupont patient and part of the class action. A stent Dupont placed in her left foot, which he eventually removed, has led to pain and difficulty walking. Brathwaite filed a complaint with the college.

Her medical file includes the ID number for a legitimate Health Canada approved implant, but is missing other authentication measures — including a validation sticker and ID card.

“I am really pissed off about this. It’s terrible,” Brathwaite says.

She may never know if she got the stent she paid for. Brathwaite says she still has pain in her foot she didn’t have before the surgery by Dupont.

View this article as it originally appeared on CBC.ca on May 6, 2016:  Go Public | Ottawa foot doctor Pierre Dupont and College of Chiropodists being sued for $15M

If you believe you are a claimant, please register for the Pierre Dupont class action.