Skip to content Skip to footer
In The Media, Opinion

Sloan Mandel, a partner at Thomson Rogers, along with members of the Personal Injury Alliance (PIA Law), sisters Shannon and Erica Deering and other accident victims were at Queen’s Park yesterday protesting against Insurance rule changes. Specifically, the government’s proposal to slash the maximum amount a person can claim for a catastrophic injury from $2 million to $1 million. View original post on torontosun.com 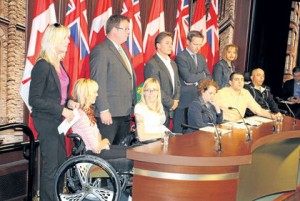 The reductions are most significant for those suffering from catastrophic injuries.

Since 1996, these victims were entitled to reasonable and necessary medical and rehabilitation services up to $1 million, in addition to up to $1 million in attendant care benefits.

That combined coverage of $2 million will now be cut by 50% to a combined $1 million.

According to the Personal Injury Alliance (PIA Law), the changes outlined in the provincial budget would shift the financial burden of accident-relate health-care costs from insurance companies to the taxpayers.

Sloan Mandel calls it a “double whammy” to those who are catastrophically impaired.

A coalition made up of the Personal Injury Alliance, the Brain Injury Society of Toronto, the Spinal Cord Injury Ontario and individual victims held a press conference at Queen’s Park Thursday afternoon to appeal for a stop to auto insurance changes.

As part of the provincial budget announced on April 23, the Ontario government has decided to first throw seriously injured accident victims off the bus and then deprive them of the ability to make a good recovery. The announcement comes as a total blindside to interested stakeholders.

WHAT CAN YOU DO?

Write and email your local MPP, Charles Sousa and Premier Kathleen Wynne with your opposition to these changes. Engage your respective communities to stand up against this. Groups and associations that advocate for the righst of children, seniors, the disabled, brain injured, spinal cord, and other impacted groups must be engaged as well.