On September 14, 2017, FSCO Arbitrator Benjamin Drory declared that the Minor Injury Guideline (“MIG”) insofar as it applies to “chronic pain” victims of motor vehicle accidents is unconstitutional and in violation of section 15 of the Charter of Rights and Freedoms.

The decision rendered in Abyan v. Sovereign General Insurance Company is a landmark ruling that addresses the issue of discrimination in the Statutory Accident Benefits Schedule (SABS).

The MIG limits medical and rehabilitation amounts payable to accident victims suffering from so-called “minor injuries” to $3,500. Minor injuries are defined under the SABS to include, “one or more of a sprain, strain, whiplash associated disorder, contusion, abrasion, laceration or subluxation and includes any clinically associated sequelae to such an injury.”

An exception to the MIG applies where an insured person has a “pre-existing medical condition that was documented by a health care practitioner before the accident and that will prevent the insured person from achieving maximal recovery from the minor injury if the insured person is subject to the $3,500 limit.”

The applicant Abdirahman Abyan, a 51-year-old taxi driver, was injured in a motor vehicle accident on June 19, 2015. An x-ray taken on June 21, 2015, revealed degenerative disc disease in his cervical spine, which was not “documented” prior to the accident. He sustained soft tissue injuries and diffuse body pain. On June 8, 2017, the Applicant’s doctor reported that his injuries had not resolved within the expected time period and diagnosed him with chronic pain.

The insurer unhelpfully classified Mr. Abyan’s injuries within the MIG. Mr. Abyan argued that the MIG as it applies to chronic pain patients draws an arbitrary distinction that perpetuates historical disadvantage and breaches Section 15(1) of the Charter of Rights and Freedoms, which prohibits discrimination based on mental or physical disability.

The applicant also argued that the MIG discriminates in its exception that applies to pre-existing medical conditions documented before the accident.

The applicant argued that the “documentation” requirement discriminates against those who are not able to have their pre-existing injury documented or who are not aware of an asymptomatic pre-existing condition (and thus have no need or ability to see a medical practitioner and document the condition).

Arbitrator Drory stated that chronic pain can be, and often is, a sequel of an injury which results in accident victims being caught by the MIG and subject to the $3,500 cap, in ways that many other accident victims (including those suffering less severe injuries) do not. The Arbitrator stated that:

“It is unclear if the drafters of the legislation intended for chronic pain sufferers arising from an MVA to be captured within the MIG; but regardless, it is clear that the way the definitions in this Schedule read, that is a result.”

Arbitrator Drory relied heavily on the decision of the Supreme Court of Canada in Nova Scotia (W.C.B.) v. Martin, which found that chronic pain patients were discriminated against under Nova Scotia’s statutory worker’s compensation scheme and stated as follows with respect to the widespread misunderstanding about chronic pain:

“I am satisfied from the evidence in this case that chronic pain is a debilitating condition that is poorly understood. It is a whole person impairment encompassing both physical and mental impairments. The Supreme Court in Martin was concerned by evidence of inaccurate negative assumptions towards chronic pain sufferers widely held by employers, compensation officials, and the medical profession itself, some of whom identified that the correction of negative assumptions and attitudes of this kind would be a significant step in improving the treatment of chronic pain.”

Arbitrator Drory found that the limitations placed on chronic pain sufferers and their recoveries by virtue of the MIG are discriminatory:

“I am satisfied that the effect of the MIG arbitrarily discriminates against MVA victims who suffer chronic pain as a clinically associated sequelae to the MVA, in ways that those who do not suffer from chronic pain resulting from an MVA do not.”

Arbitrator Drory further found that the phrase, “that was documented by a health practitioner before the accident” has discriminatory effect as it means individuals without access to a doctor or OHIP, who have a pre-existing asymptomatic and undocumented condition, would not have the benefit of the MIG exclusion.

Turning to remedy, Adjudicator Drory read down the MIG to exclude chronic pain victims from the definition of “clinically associated sequelae” and severed the language requiring documentation of pre-existing conditions from the MIG definition.

Unfortunately, Adjudicator Drory held (as per previous administrative tribunal jurisprudence regarding Charter issues) that his decision regarding the Charter violation applied only to the case before him and is not a declaration of general invalidity applicable to any other cases.

Nevertheless, the arguments made in this case can be applied going forward in other chronic pain cases involving the MIG. The recognition of the historical misunderstanding of chronic pain conditions and mistreatment of those suffering from chronic pain should resonate with other arbitrators and judges.

Going forward this decision will make it exceptionally difficult for insurers to treat chronic pain conditions differently than other disabilities. I anticipate that the decision will result in a dramatic watering down of the arbitrary and restrictive MIG provisions in practice and hopefully through eventual legislative amendment. 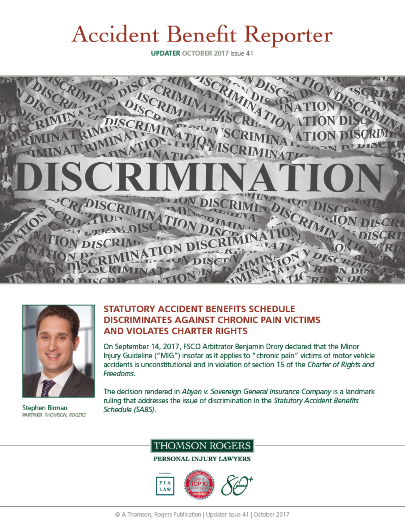 If you have any questions, please contact personal injury lawyer Stephen Birman at 416-868-3137 or by EMAIL.