In a recent costs decision, Aviva Canada (“Aviva”) was hit with a $237,017.50 substantial indemnity cost award. The decision was rendered by Madam Justice Sanderson following a jury trial between the Plaintiff, Maria Persampieri, and various defendants insured by Aviva.  The jury in the action had awarded the Plaintiff damages of $20,414.83 following an earlier trial.

The decision involves an elderly Plaintiff who was injured in a motor vehicle accident in 2009. By the time the case got to trial in 2017, the Plaintiff was 84 years old. The decision is significant because the Plaintiff made a formal offer to settle her claims prior to trial for the reasonable sum of $10,000, plus costs. According to the trial judge, “the insurer here rejected a Plaintiff’s offer that would have made it possible to pay minimal damages.”

In the 8 years lead up to a trial, Aviva made no offers to settle the claim. To the contrary, Aviva’s counsel advised Plaintiff’s counsel that it had an internal system of assessing motor vehicle accident claims and that it would not be willing to offer even $1.00 to resolve the claim. Plaintiff’s counsel was advised that once this internal decision was made nothing along the road to trial could be done to alter that.

Fortunately, for the Plaintiff, she was successful at trial and the jury awarded her an amount that exceeded her offer to settle by more than 2 times.

After the trial, submissions were made regarding the insurer’s payment of the Plaintiff’s legal costs.  The Plaintiff, having “beat her offer”, rightfully sought substantial indemnity costs for the significant legal expenses associated with advancing her claim through trial.

Aviva argued that any costs awarded should be modest and not disproportionate to the amount awarded by the jury.

The Judge noted that the proportionality principle is generally invoked to foster access to justice, “however a strict application of the proportionality principle here could work against the achievement of that goal and have the opposite effect,” as Aviva was a “sophisticated insurer that made a tactical decision to reject a Plaintiff’s formal Rule 49 Offer to Settle, understanding the risk in costs that it was taking by doing so.”

The Judge astutely stated that to sanction under compensation of the Plaintiff’s costs that were legitimately incurred could generally discourage plaintiffs with modest claims, from pursuing them at all.

The Judge was also critical of Aviva’s early and unalterable decision in the litigation not to pay any tort damages. Justice Sanderson stated that “adoption of such an unalterable decision-making process would render meaningless and make a mockery of the pretrial resolution process, aimed as it is, at encouraging and effecting settlement to avoid unnecessary trials.”

The Judge concluded the discussion by stating that, “total unwillingness to reassess/discuss settlement based on full information and advice should not be sanctioned in any way (including by sheltering insurers from the foreseeable costs consequences of such a decision should it fail to yield a result favourable to an insurer in a particular case.)”  In my view, this decision harshly (but correctly) indicts the insurer’s approach and conduct in this litigation.

From my perspective, there are many interesting aspects to this decision, including the following:

When a decision like this is delivered, everyone involved in the litigation of personal injury claims needs to look in the mirror and ask how they can do better for their clients and how outcomes like this can be avoided in the future. 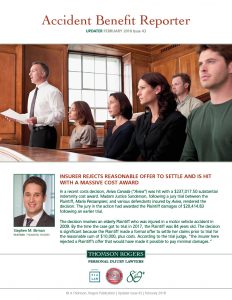 If you have any questions, please contact, personal injury lawyer Stephen Birman at 416-868-3137 or by EMAIL.

Read other articles by Stephen Birman: