Enough For The Journey Ahead? 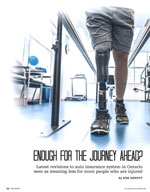 Latest revisions to auto insurance system in Ontario seen as meaning less for more people who are injured.

Few people expect to walk away from a car crash unscathed. But when it comes to the most severe financial and medical impacts, most assume their automobile insurance will cushion the blows.

For Ontario drivers, that protection is becoming less certain, the province’s trial lawyers  are cautioning.

Recent cuts to accident benefits available under the province’s no-fault care insurance scheme have increased the risk to both the health and personal assets of drivers, warns Adam Wagman, president of the Ontario Trial Lawyer Association (OTLA).

Touted by the provincial government as a way to lower care insurance premiums, cuts came into effect on June 1, that significantly reduce benefits available to people who are catastrophically or seriously injured in accidents.

And for drivers who injure someone else, those cuts result in an increased liability that could bankrupt them if the case lands in court.

This is going to have a real impact on individuals, and there’s no question about it, people are going to suffer,” says Wagman, a personal injury lawyer and senior partner with Howie, Sacks & Henry LLP.

The most significant changes will affect people who have suffered injuries that leave them catastrophically impaired, such as loss of vision, loss of use of limbs or serious brain trauma.

Those victims now have access to $1 million to cover all of their medical, rehabilitative and attendant care expenses, down from the previous benefit of $2 million.

For people facing a wide range of expenses to help them recover from their injuries and manage their new circumstances, $1 million is not a lot of money, says Wagman. “There’s going to be some very, very tough choices to be made.”

For example, he suggests people may have to weigh the value of renovating their home to make it wheelchair-accessible against the merit of having a few more years of attendant care visits to help them with their daily tasks.

“Reducing insurance premiums on the backs of people in wheelchairs just can’t make sense from a policy perspective,” says Wagman.

Over the last 20 years, catastrophically impaired accident victims have seen inflation and rising healthcare costs erode the value of the $2 million benefit. With this cut, she says it’s clear that the limited benefits won’t cover the needs of injured people.

“The current cost of a prosthetic leg for someone with an amputation above the knee can range from $75,000 to $125,000, with replacement required about every five years,” she says. “Specialty legs for running or swimming are an additional expense. Alone, the lifetime costs fro a prosthetic limb of a 35-year-old accident victim will exceed the new $1 million limit.”

She’s also worried that changes to the definition of catastrophic impairment will make it more difficult and time consuming for people to qualify for benefits.

“It means that the most horribly injured people can’t get treatment quickly after an accident and healthcare people will tell you that there’s a real window of opportunity . . . you get in early and that’s how you recover best,” she says.

Individuals suffering serious but non-catastrophic injuries such as fractures or brain injuries will also see a drop in benefits, for the second time this decade. They now have access to $65,000 for combined medical, rehabilitative and attendant care expenses, down from $86,000. Those benefits were cut from $172,000 about six years ago, leaving people with access to about 65 percent less money than they had before 2010, says Moore Mandel.

Beyond the impact of these changes to victims, Wagman warns the cuts effectively increase the liability of at-fault drivers facing lawsuits launched by people they may have injured.

Ontario’s dual system provides accident benefits under a no-fault system, but in some circumstances also allows drivers to sue those responsible for their accidents. While all drivers must carry a mandatory $200,00 in liability insurance to protect themselves against tort claims, most insurance companies won’t even sell policies with that low a level of protection, says Wagman.

According to a spokesperson for the minister of finance, more than 96 per cent of vehicles carry at least $1 million in third-party liability coverage. But with the cuts to accident benefits, that coverage isn’t likely to be sufficient protection for at-fault drivers who will be liable for the additional costs facing their victims, says Wagman.

“The shortfall in these cases where people only have $1 million in liability coverage and cause someone to be catastrophically impaired – their personal exposure has now gone through the roof,” he says.

“People are not aware that the reduction in benefits doesn’t just impact on the victim. It impacts substantially on the person who caused the accident and caused the victim to be catastrophically impaired.”

The cuts to accident benefits were undertaken as part of a package of reforms the provincial government introduced in an attempt to reduce insurance premiums by 15 per cent over two years.

“In tackling the auto insurance system, we looked at other provinces with privately delivered systems and noted that Ontarians were paying much more for their auto insurance than our provincial counterparts,” said an e-mail statement from Kelsey Ingram, press secretary to Ontario Minister of Finance Charles Sousa. “For example, in 2014 Ontario accident benefits claims costs per insured vehicle were over $350 versus $41 in Albert, which is unacceptable.”

Industry analyst and consultant Willie Handler calculates that insurance premiums have dropped 9.84 per cent across the market since that promise was made, but notes that they are inching higher already, with an approved average increase of .33 per cent for the second quarter of 2016.

In a recent blog posting, he predicted consumers would see little financial benefit from the cuts to accident benefits, noting that “product reforms have proven to be an ineffective tool for controlling auto insurance premiums in Ontario.”

Part of the reason for that, says Handler, is because paying for accident benefits is only a small portion of the cost of the automobile insurance. Vehicle repair costs, litigation costs, overhead costs and transactional costs also factor into premiums.

Along with cutting accident benefits to lower costs, the statement from Ingram noted that the province is making other consumer protection changes, including capping the maximum interest rate insurers may charge fro monthly premium payments and prohibiting premium increases for some minor at-fault accidents.

Read FULL article by Kim Arnott as it appeared in The Lawyers Weekly Recovery Personal Injury Magazine, Vol.3 No.2, 2016: Enough For the Journey Ahead?