Riding Toronto’s Streetcars Can Be Dangerous 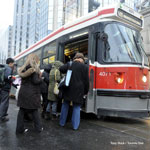 “Young girl struck by a car after stepping off TTC streetcar”. Headlines like these spatter Toronto news outlets far too often.

Any Torontonian that rides a streetcar knows that getting on and off streetcars can be dangerous. With streetcars stopping so frequently along major downtown arteries, adjacent vehicles (including bicyclists) don’t always stop to allow passengers to enter and exit vehicles safely. This is the most dangerous transfer point for passengers using the TTC.

So what’s the main source of the problem? Are drivers too aggressive in trying to pass streetcars before they come to a complete stop to pick-up and let off passengers? Should passengers be more cautious? Is there enough signage to inform drivers to stop?

The onus can’t be placed on passengers if vehicles hit them when they’re boarding or exiting streetcars. While it’s important for riders to look in the direction of traffic to ensure all vehicles have come to a stop, it’s not necessarily their responsibility to avoid being hit by vehicles that should have stopped anyway.

Drivers are a major problem; as many incidents occur as vehicles try to race past the streetcar prior to stops. This creates a very dangerous situation for riders as vehicles are actually accelerating. Additionally, drivers who aren’t familiar with Toronto and driving amongst streetcars may not understand that a slowing or stopping streetcar means riders will be entering and exiting. Case in point is a young man who was quoted as saying to the police officer after a particular harrowing accident – “we don’t have streetcars in Beamsville… I didn’t know I had to stop”. In the same instance, the signage on streetcars to alert drivers to stop is very insufficient. Even school buses have arms that come out with flashing lights in order to inform drivers to slow down and stop. Why not on the back of a streetcar?

To compound the problem, Toronto has way too many stops; temporary stops are placed on street and building construction sites, which amplifies issues for everyone involved; and allows bicyclists to use roads that cannot accommodate streetcars, bicycles and cars all at the same time. Can someone please explain to me why Eastern avenue was narrowed to have bicycle lanes? All the bicyclists simply go north to Queen Street where there are no specially marked lanes other than railway tracks.

If you ask just about any Torontonian that rides a streetcar they’ll have a story about almost being hit by a car while entering or exiting, whether it involves them directly or another passenger. We’d like to hear what your experiences are surrounding this major transit issue. Have you ever had a close encounter with a vehicle while getting on or off a streetcar in Toronto? What happened in your situation?