I recently posed the question of why some juries grant low damage awards in motor vehicle personal injury lawsuits.

I hypothesized this may be due to the barrage of insurance industry advertising and lobbying concerning insurance fraud, as well as the use of partisan expert witnesses by the defence.

But Jack Fireman, a personal injury trial lawyer who acted for insurance companies for 30 years before switching to the plaintiff’s side 16 years ago, posed another hypothesis.

He pointed out it wasn’t so long ago that juries came up with large awards for plaintiffs, even though insurers were crying fraud and were using partisan experts then as well.

Fireman believes what’s changed is the diminished prestige of personal injury lawyers due to their “gaudy and tasteless advertising”.

He drew my attention to ads posted above urinals.

I have to admit being taken aback by the extent and nature of these, “been in an accident?” ads that have proliferated in the past few years.

Fireman believes they have impacted jurors in a negative manner.

He also believes there may be a lack of jury trial experience among many lawyers representing plaintiffs in these suits.

Those are valid concerns and I wouldn’t be surprised if they are partly or sometimes largely to blame for some of the low jury awards. 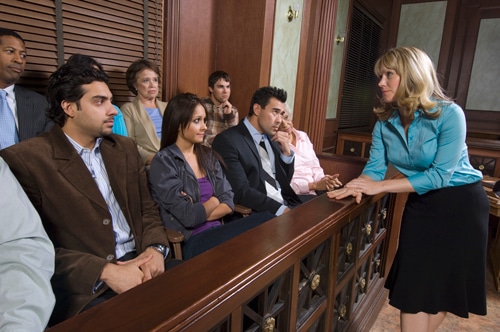 Toronto personal injury lawyer Darcy Merkur has other theories on this issue.

He points to the rule that forbids lawyers from informing juries about the existence of insurance.

It’s true. No one mentions insurance in a personal injury lawsuit.

By forbidding any reference to insurance, we create the impression the people sued for having caused accidents will be personally footing the bill, paying out the jury’s damage awards. In fact, in most cases, the people sued have insurance and it is their insurance companies that will be paying.

Not only do we not inform the jury about a defendant’s insurance, we also don’t tell the jury the amount of insurance coverage the defendant has.

The minimum amount of third-party liability coverage in Ontario is $200,000 but many drivers have much more coverage.

We also don’t tell jurors that there is a deductible that will be subtracted from many awards of damages for pain and suffering.

Merkur also believes some jurors may award less money to plaintiffs who aren’t likable, those with criminal records or perhaps even people who may simply be different from the jury members. Perhaps that is just human nature.

I don’t know if any of these theories are correct. They make sense but we aren’t allowed to speak to jurors to ask them why they did what they did.

But if you ever find yourself on a civil jury deciding a personal injury case, try to do the right thing, without regard to the likability or characteristics of the plaintiff.

Don’t assume your monetary award will be paid by the defendant personally. Understand that there is almost always an insurance policy protecting the people who have been sued.

Listen to the evidence with an open mind and no preconceived notions. Be fair.

If you believe the plaintiff’s version of events, treat him or her the way you’d like to be treated if you had suffered injuries in an accident.

View this article as it originally appeared in the Toronto Sun on May 21, 2016: Jurors deciding claims in motor vehicle accident cases need key information