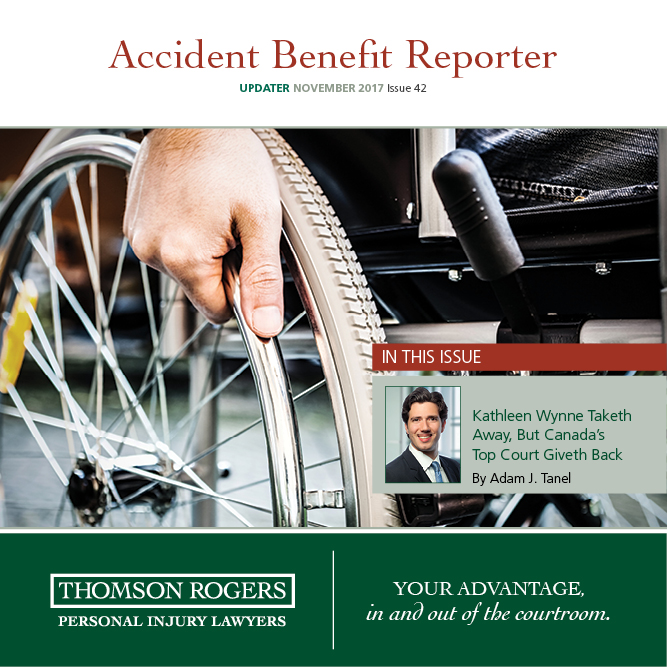 Just months ago the Wynne government stripped tetraplegics, amputees and brain injury survivors of important benefits (at the request of the insurance industry). However, in more recent news, the Supreme Court of Canada just made it easier for Plaintiffs to advance claims for mental/psychological damages.

In the B.C. trial of Sadaati v. Moorhead, released earlier this year, a unanimous Supreme Court granted the Plaintiff’s appeal and restored the trial judge’s decision to award the Plaintiff $100,000 in non-pecuniary damage. This award was upheld despite the fact that the Plaintiff did not offer any evidence of a medically recognized psychological illness, relying instead on evidence from friends and family about his changed demeanour.

While it may seem like common sense to listen to the people who know the Plaintiff the best; the court’s recognition of the importance of this evidence is a boon for Plaintiffs.

Defendants typically don’t get to interview friends and family. A plaintiff’s family and friends are often unwilling to talk to the other side, which challenges insurers to rebut this evidence.

The Supreme Court did not dismiss the value of expert evidence, it just acknowledges that it is not necessary in all cases, and laypeople’s evidence can be just as valuable to the court.

Other Posts by Adam Tanel: