Be on guard for big auto insurance changes

Mandatory auto insurance coverage in Ontario is about to change significantly. Although it will cost less, it won’t offer as much protection.

As a result of the changes, which will go into effect June 1, the cost for base coverage will drop an average of 3.7 per cent. But consumers are being advised to educate themselves and canvas the market to decide on what is best for them.

Two experts with an understanding of insurance coverage recommend paying a few extra dollars per month for benefits as protection against possible catastrophic injuries sustained in a car accident.

David MacDonald, a personal injury lawyer with Thomson Rogers, and Michael Brattman, the chairman of the Insurance Brokers Association of Ontario, both stress the importance of paying for added premiums.

“I’m very worried about this because there are too many accident victims and too few benefits to help them get better,” MacDonald says. “Unfortunately people think they will never be in an accident and then it happens.

“Most people don’t know that they can do a better job in protecting themselves and their family by paying a few more dollars a month for optional benefits and increasing their family protection coverage and third party coverage to at least $2 million. If you spend a few dollars more a month to get the optional benefit and extra third-party liability coverage you save a lot of stress and heartache when an accident happens.”

That thought is echoed by Brattman. He says drivers should consider what happens when someone suffers a serious injury. 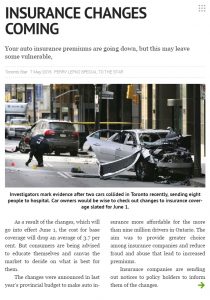 Read full story as it originally appeared in the Toronto Star on Saturday, May 7, 2016: Be on guard for big insurance changes